As we get nearer to free agency, and things in the NFL landscape become clearer, I like to take a look at what the Green Bay Packers might do this offseason. I’m going to be running several simulations of renegotiations, cuts, re-signing, free agency, and the draft.

Randall Cobb – I believe a fair offer is 4 years/$4 million per. That drops his cap number to around $2.8 million for 2018 which is a colossal savings and keeps him in Green Bay through his prime.

Jordy Nelson – I’d give Nelson 4 years/$6 million per. That would drop his cap number to around $4.2 million for 2018. That’s a fair market offering, and may allow Jordy to retire as a Packer.

Aaron Rodgers – Rodgers will never earn his true value to the Green Bay Packers in his salary, but I think it would be fair for them to give him the richest deal in NFL history. 5 years/$150 million with half of that guaranteed would surpass Jimmy Garoppolo’s deal by a significant margin and still leave the Packers with an average cap charge of $30 million/year. They could structure that however they wanted. Rodgers may keep that number low for the first few years, so Green Bay can spend it on some free agents. They can always renegotiate to increase flexibility later. For this simulation, we’ll make it a cap hit of $30,000,000 for 2018.

S Morgan Burnett – 3 year, $8 million/year. I think Burnett is going to be one of the key pieces to Pettine’s defense. I’ve heard higher numbers floated, but this is what I put Burnett’s value at. I could see him testing the market, and then resigning with Green Bay. Remaining Cap Space – $24,744,484

OLB Trent Murphy – 1 year, $3 million. Murphy was an emerging pass rush threat before he tore his knee up last year. I think he’ll look for a “prove it” deal somewhere, and Green Bay could certainly use great pass rushers.

CB Kyle Fuller – 4 year, $8 million. Fuller hasn’t developed into the elite CB he seemed on target for after his rookie year. However, he’s still good, young, and may perform better in a winning environment. Plus they can take him away from their arch rivals.

1st – 14: LB Roquan Smith, Georgia. Smith is a game changing Inside Linebacker. He seems to be sliding a little bit because of all the QB talk at the top of the draft. Smith would pair with Blake Martinez to form a formidable duo in the middle, and Roquan immediately becomes Mike Pettine’s favorite player.

2nd – 13: OLB Arden Key, LSU. Key has a ton of athletic ability, but still needs to figure the game out. He was originally considered a mid-first round draft pick, but he’s coming off an injury and there are questions about his pass rush moves. He’ll start his career as a guy who can blow by Tackles on the edge, but if he learns how to use his strength and his hands better, could be a great all around pass rusher.

3rd – 12: TE Hayden Hurst, South Carolina. Hurst has all the tools to be a really good pass catching Tight End. One of the biggest knocks is that he’ll be 25 when the season starts having played minor league baseball. He might be a liability as a blocker, and he needs to refine his route running (he’s tipping his routes frequently), but he has the speed and size of a really big receiver, and Aaron Rodgers needs someone to stretch the middle of the field.

4th – 14: TE Dallas Goedert, South Dakota St. I like Goedert as high as the 2nd round, but he might be slipping a little. I expect him to have a great Combine and climb back into that late-first round conversation, but for this sim he fell into my lap in the 4th. Having two TEs capable of stretching the field is a huge asset for this offense.

4th – 33: WR Antonio Callaway, Florida. Callaway is pure explosiveness. He’s also pretty explosive off the field. This would be a gamble that Ted Thompson would never make, but I think Gutekunst might be willing too. Former Packer executive John Dorsey took a mid-round gamble on Tyreek Hill and it worked out pretty well for the Chiefs, and I think Callaway could have a similar impact. Jordy, Cobb, and Adams would be great role models for Callaway.

5th – 13: CB Duke Dawson, Florida. Dawson is a very solid corner who lacks great straight line speed. I like his physicality on the line and ability to play the slot right away.

5th – 35: ILB Shaun Dion Hamilton, Alabama. Hamilton is considered to be the smartest linebacker on a Alabama LB unit that sends multiple players to the NFL every year. However, he’s come off of back-to-back knee injuries. I’m willing to take that risk because he would likely be the 3rd or 4th ILB, and he has a really high ceiling.

5th – 37: G Wyatt Teller, Virginia Tech. Teller was once one of the best d-line recruits in the country. He made the switch to o-line and had a fabulous 2016 campaign, but looked disinterested and aloof in 2017. I’d be willing to take a chance on him regaining his former reputation as a nasty Guard in a different setting.

6th – 12: RB Bo Scarbrough, Alabama. He’s a throwback power runner. Seeing the impact LeGarrette Blount had on the Patriots and Eagles the last two seasons, makes me think Scarbrough could carve out a role in this offense.

7th – 14: QB Kurt Benkert, Virginia. Benkert has some tools that could make him a good developmental QB. My biggest error in this simulation is not getting a Hundley replacement.

7th – 21: P JK Scott, Alabama. I thought Justin Vogel did a really good job last year, but Scott could be a true difference maker at Punter that the Packers haven’t had since Craig Hentrich.

This would give the Packers enough room to sign some Free Agents in the secondary market. And with the potential for Clay Matthews and Bryan Bulaga to come off the books after the 2018 season the Packers can afford to spend a little of their unused cap room this offseason. 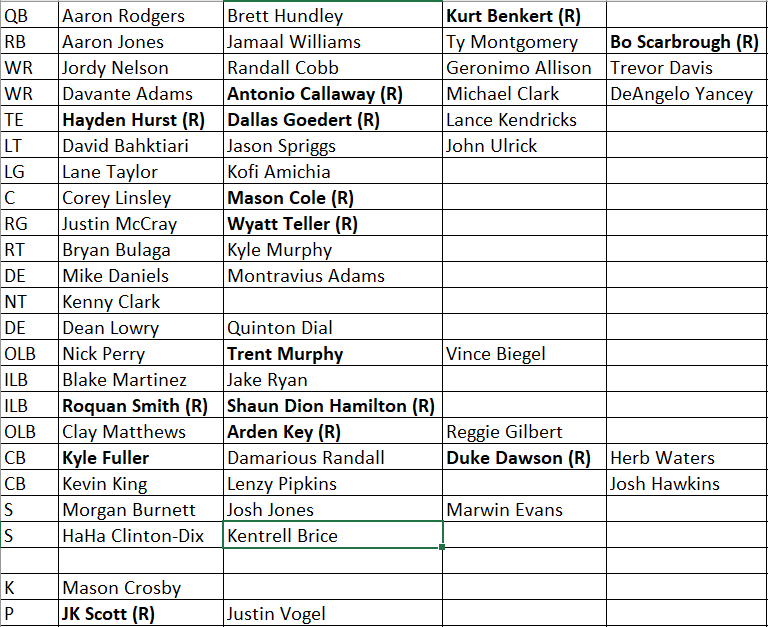