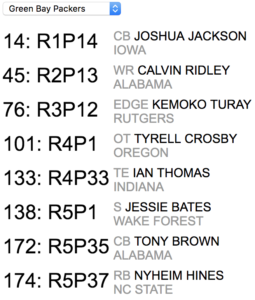 This one is a fun one.  I’ve recently had my big board featured at Fanspeak and so for my final run at a Packers mock draft I drafted against myself, using my own board.  If you guys want to try and use my board you certainly can and it’s right here at Fanspeak.

Pass rusher Harold Landry was gone when Green Bay selected.  Landry is the top rusher in this class and the play I believe to have the most ability to impact Green Bay as a franchise.  With Landry gone I immediately turned my focus to the defensive backfield.  Josh Jackson (CB1) joins Kevin King as a potential shutdown CB tandem with tremendous size.

In this simulation Ridley’s poor athletic testing slide him down the board to #45.  Sutton and Gallup were off the board, so I pulled the trigger on the Alabama prospect.  Ridley still possesses the speed to win and didn’t struggle to create separation in the SEC.  Ridley is an excellent route runner.

Also with Ridley – the route running isn’t a product of age, he was smoking Vernon Hargreaves as a freshman mulitple times. Kills him on release here: pic.twitter.com/MAT5AdY5jo

Kemoko Turay is an athletic freak.  He posseses the elite 3 cone time (6.81) projects him as a fantastic pass rusher at the professional level.  His production wasn’t quite there at Rutgers, but there wasn’t any talent around him either.  Offenses were able to lock in on Turay and gameplan for him.  Crosby serves as Bulaga insurance and a potential starter.  Thomas and Hines are versatile weapons offensively and Tony Brown can instantly compete for nickel work. His 5117 height and 4.35 40 don’t hurt either.

DraftTek, Jersey Al Bracco – Marcus Davenport, Quenton Meeks, Dante Pettis – Al going with the projecty guys.  Davenport and Meeks need serious work before they can contribute as starting pros, but Pettis doesn’t.  Even at receiver, which is a difficult position to make an immediate impact at, Pettis understands route running and route leverage better than many of his colleagues.  Pettis also immediately upgrade the return situation.  Well done.

NFL.com, Daniel Jeremiah – Marcus Davenport – I’ve made my thoughts clear on this. It is a “meh” situation.  All the talent in the world, I don’t want to wait for it.

NFL.com, Bucky Brooks – Minkah Fitzpatrick – This is awesome.  Fitzpatrick is a top 5 or 6 player in this draft and frankly a team like Green Bay shouldn’t be in a position to draft a playmaker like Fitzpatrick without having to trade up.

NFL.com, Charley Casserly – Mike Hughes – Meh. Not my favorite corner. Worse than that, though, Casserly takes Hughes with Landry and Jackson still on the board.  I would not be well.

NFL.com, MJD – Denzel Ward – love the pick. Ward is right there with Jackson for me and as a shorter guy offers immediate help at nickel.  I just don’t like that they traded up for him.  I think that’s unnecessary, especially when the Dolphins, in MJD’s mock just took Fitzpatrick (a better football player) anyway.

NFL.com, Chad Reuter – Denzel Ward -again love the pick and this time they didn’t trade up to make it happen.  I wouldn’t do it with Landry on the board, but I certainly wouldn’t freak out.