The Green Bay Packers barely showed up on Sunday against the Detroit Lions, and that brutal performance is a fitting end to the 2018 season. Today is not just about saying goodbye to the season, but it will also mark my 150th and final article on PackersTalk.com.

The season started with one of the greatest games in Lambeau history when Aaron Rodgers returned at halftime to lead a historic comeback against the Chicago Bears. That was followed by the tie that was gifted to the Vikings with a terrible roughing the passer call on Clay Matthews. The Packers never could gain any momentum against Washington, trounced Buffalo at home, and then lost an incredibly frustrating games against the Lions and squeaked out a victory in the final moments against the 49ers* leading into their bye week.

Green Bay gave a lot of hope to the fanbase with their performance against the Rams, but the Ty Montgomery fumble put an end to that hope and they could never quite get over the hill against the Patriots. The Packers had another dominating win over the Dolphins, but followed it up with three straight one score losses to the Seahawks, Vikings, and Cardinals. After a win against the Falcons, Green Bay still had the slimmest of playoff hopes. However, a loss against the Bears ended that. And of course, they finished up the season with wins at the Jets and a loss against the Lions.

While we are surely disappointed as a fan base in the last two seasons there are still a lot of things to be very optimistic about. Brian Gutekunst will have an opportunity to modernize the coaching staff and bring a strong new energy to the team. The Packers will have a ton of cap space and extra first and fourth rounds pick. They will have an great chance to quickly upgrade at edge rusher, safety, and on the offensive line. They have several young players who can take a big leap forward. All things considered, the Green Bay Packers will have a great chance to go from worst to first in the NFC North.

Finally, I want to take this chance to say a huge thank you to Jersey Al for giving me the opportunity three years ago at PackersTalk.com. This is the single greatest reason I was able to join the Pack-a-Day Podcast. If you are interested in listening you can subscribe on any of your favorite podcast services or check it out at Cheeseheadtv.com. A sincere thank you to everyone who has read my article and especially those who have commented or interacted on Twitter. IF you want to continue our Packers banter, you can find me @AndrewMertig.

*Edit: The original version of the article incorrectly indicated a loss to the 49ers. 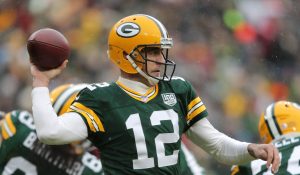 The Green Bay Packers demonstrated some fight in their victory Sunday against the Atlanta Falcons. ...read more