Now I see why the Packers passed on Noah Fant and Irv Smith Jr. They select versatile tight end Jace Sternberger out of Texas A&M with the 75th pick in the 2019 NFL Draft.

First off, this is a guy that quarterback Aaron Rodgers will enjoy throwing to and this is also a warning to Jimmy Graham because this kid knows how to be humbled. He started his career with the University of Kansas and then went to play for Northeastern Oklahoma A&M in his redshirt freshman year. It was Texas A&M where he became a consensus All-American that helped with his and the growth of Kellen Mond with 48 catches, 832 yards (17.3 yards per catch) and a spectacular ten touchdowns in his lone year in College Station, Texas.

He has absurdly tall size at 6 -foot-4 and 232 pounds, watching his game film. He has the ability to be a breakout player in the middle of the field, can make plays on the run and add yards after the catch. Sternberger will compete hard for Rodgers’ attention on the go route along with Robert Tonyan and Graham. 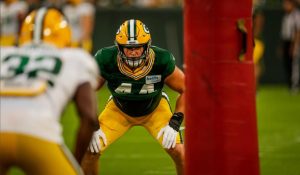