The Green Bay Packers have their foot on the gas going into their bye week.

After a hard-fought tundra battle against the Carolina Panthers that came down to literal inches, the team sits comfortably at 8-2. With the San Francisco 49ers and New Orleans Saints losing divisional games this Sunday, the Packers have a concrete shot at a first-round bye in the playoffs. Traditionally, the Packers have needed the bye week to get key players healthy, but the team is in relatively good health.

While the team is in an ideal position at this point in the season, the bye week is a great time to shore up the few deficiencies the team does have. Keeping their foot on the gas in a traditional LaFleurian manner is key in a competitive NFC race. Here are a few focal points from this couch GM’s point of view.

Embrace Allen Lazard as WR2
When Davante Adams missed time, I preached the importance of thrusting the younger wide receivers into the limelight to see what they can do. I was pleasantly surprised to see Lazard fill that role, playing a crucial role in the win against the Lions. Lazard saw a significant increase in snaps but has since trickled down, playing 44.1% offensive snaps against Carolina.

Lazard made the most of those snaps in spite of some questionable, putting it politely, OPI calls. In that game, Lazard was out targeted only by Davante Adams. With ideal size, good hands, and the ever-important trust of Aaron Rodgers, now is the time for the offensive coaches to commit to Lazard as WR2. Geronimo Allison, MVS, and Kumerow still have roles to play on offense, but Lazard has earned the right to fill the WR2 void.

Shore up the run defense
Credit where credit is due: the Packers stopped the league’s best running back from a chance to tie the game at the eleventh hour last Sunday. All things considered, the Packers defense contained Christian McCaffrey admirably. The return of Ibraheim Campbell certainly was a big help, and Kenny Clark absolutely dominated this game, but there’s still plenty of work.

Inside linebacker remains an issue, with Blake Martinez not playing particularly well. A true second ILB would go far in helping Martinez, but neither Oren Burks or B.J. Goodson are doing enough to assist. Players of need don’t grow on trees (I think, I’m not a botanist), so Mike Pettine will need to come up with solutions. The 49ers and Vikings, the two most dangerous opponents on the remaining schedule, host dangerous runners.

Prepare for the 49ers and Vikings
Green Bay’s schedule for the rest of the season is favorable, with games against the Giants, Washington team, Bears, and Lions all very winnable. San Francisco and Minnesota are the lone winning teams and will be a trial of strength. The 49ers are in first place of the NFC, and the Vikings are right behind the Packers in the NFCN. As mentioned, both teams feature powerful running games – which the Packers struggle against.

Rest and get the major playmakers ready for action
Green Bay is gifted with plenty of playmakers, with Aaron Jones, Jamaal Williams, Elgton Jenkins, the Smiths, and Adrian Amos having incredible seasons, to name just a few. Yet a few have had odd struggles this season. David Bakhtiari hasn’t been his All-Pro self, getting beat more often by edge rushers and committing a worryingly high number of penalties. Jaire Alexander had a hot start and continues to play at a high level, but he’s had multiple opportunities for game-ending turnovers that he hasn’t managed to hold onto. Kevin King is a splash play machine, but unfortunately, he’s given up as many as he’s created.

Some rest and time to focus could be the key to getting these players at their peak levels. Each one has more than earned benefit of the doubt, and their effort cannot be questioned. Ideally, the week off will allow these players time to work out a few kinks and continue playing at the level we know they can.

Gil and J.J. break down the hard-hitting matchup this Sunday against Tom Brady and the ...read more 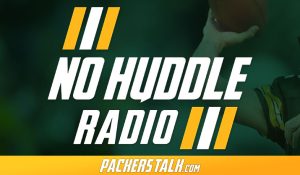 No Huddle Radio #3: Still Undefeated! A Look Ahead After The Bye

Gil and J.J. celebrate the Packers' strong start to the season, although season-ending injuries for ...read more