After being humiliated in Prime Time last Sunday night in San Francisco, the Green Bay Packers need a win in the the worst way. Two of the past three weeks Green Bay has traveled to the West Coast and laid an egg. Adjustments must be made if this Packers team is to be successful in the 2019 NFL Playoffs. The first step? A win in the Meadowlands against the New York Football Giants.

There were far too many instances in the Chargers and 49ers games of Rodgers waiting too long to release the ball. The common theme is both these teams have strong pass-rushers, and the ability to pressure the quarterback with only 4-man rushes. This allows the secondary to drop seven in coverage and blanket the offense’s best players. Davante Adams is often hit with double coverage, and none of the other Packers receivers have been able to win. This epitomizes the Packers’ recent struggles in California. Matt Lafleur needs to make the necessary adjustments to get this offense back on track.

Thankfully, a Sunday match up with the floundering New York Giants sets the perfect stage. The Giants have the league’s 25th ranked defense in terms of yardage, surrendering an average of 315 per game. New York’s defense has been lit up by the likes of Dak Prescott (405 yards), Jameis Winston (380 yards), Tom Brady (334 yards), and Matt Stafford (342). Heck, Mitch Trusbisky threw for 278 yards and a touchdown and ran for another on this defense last week. A trip to visit the Giants is just what the doctor ordered for this Packers offense.

Mike Pettine’s defense has done all it could to keep the Green Bay Packers in the game these past few weeks. Yes, there have been blown coverage’s, and more explosive plays given up then any team would like. However, with all-world running back Saquon Barkley banged up, the Giants chances to create big plays will be solely on the arm of rookie Daniel Jones. The Duke product has looked fantastic in small spurts after taking over from Eli Manning. Yet, the Packers should be able to send a number of exotic looks to confuse the rookie. Za’Darius Smith has been simply unblockable nearly all year, and should feast in the backfield Sunday afternoon.

Even after a few awful showings these past few weeks, the Packers are an 8-3 football team. The Giants are one of the worst teams in the league, and with key injuries to wide receiver Golden Tate, and along the offensive line, are ripe for the picking. Look for Matt Lafleur to make the necessary changes to the offense, and get Aaron Jones far more involved. The Green Bay Packers should roll to a two touchdown victory in week 13. 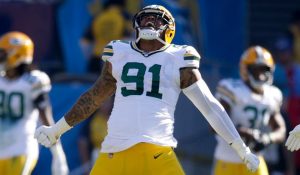