Super Bowl weekend has come and gone football fans. The eyes of the entire world descended on Super Bowl LIV in Miami for the NFL’s premier showcase, and the game did not disappoint. (Neither did the halftime show.) Unfortunately, the Green Bay Packers off-season has already begun. General Manager Brian Gutekunst and his team of scouts are deep into their tape study and evaluation of the upcoming draft class. Here’s how the 2020 NFL Draft could shake out for Green Bay.

Round 1: Raekwon Davis, IDL, Alabama:Kenny Clark needs help. As phenomenal a talent as Clark is, the Packers need more talent along the defensive line. Green Bay was gashed time and time again by the run throughout the season. Defensive co-ordinator Mike Pettine likes to use a dime defense as his base. This selection allows him to do so, and not fear the Packers inability to stop the run. Raekwon Davis is an explosive run defender, with the strength to anchor even when double-teamed. He’ll fit perfectly beside Kenny Clark, and free up linebackers and the Smith’s to attack the ball.

Round 2: Brandon Aiyuk, WR, Arizona State: Aiyuk will remind some of a quicker Anquan Bolden. Give him the ball out of the backfield, on a screen or 10 yard dig and watch Aiyuk go to work. The former Sun Devil is a true home run hitter. He’s a true competitor who will overpower smaller defensive backs, and snatch passes out of the air with strong, sticky hands. Green Bay needs to surround Aaron Rodgers with more weapons this off-season. Aiyuk is a fantastic start.

Round 3: Clyde Edwards-Helaire, RB, LSU: What’s that you say? More weapons for Aaron Rodgers? Enter Edwards-Helaire fresh off a Nation Championship victory. Clyde glides over and around defenders, often leaving them clutching at air. He’s the most dynamic back in this class and is a true chain mover. Rodgers has been loathe to check the ball down in his career, but CEH offers an outlet on every down. A two running back set with Edwards-Helaire and Aaron Jones would be lethal.

Round 4: Shaquille Quarterman, LB, Miami: You were expecting an off-ball linebacker in the first round? Despite what those other mock drafts will tell you, the Packers front office simply does not value the position. General Manager Brian Gutekunst will follow the blueprint. Quarterman is an old school linebacker with four years of starting experience coming from the “U”. Shaquille is the real deal against the run. A downhill force that will blow up ball carriers all over the field, Quarterman attacks with strong angles. He displays the ability to plug gaps, and will blow up entire running schemes on his own. Quarterman has seen it all, and his quick trigger and density allow him to win at the point of attack. An enforcer at linebacker will allow defensive co-ordinator Mike Pettine to stay in his preferred dime defense, even on early downs.

Round 5: John Simpson, IOL, Clemson: Simpson is a mauler with a real nasty streak. He continually resets the line of scrimmage in the run game, and plays with power at the point of attack. Furthermore, Simpson displayed the intelligence at Clemson to process responsibilities and calls at the line. Billy Turner struggled mightily this past year with crashes and stunts. Often left completing whiffing on his assignment at the line of scrimmage. Simpson can step in and start immediately should Turner falter again.

Round 6: Reggie Floyd, S, Virginia Tech: Looking for a three down linebacker with range? Enter Floyd who will excel as the Packers dime defender. Floyd is a big 6’1, 222 pound safety who is basically a better version of Ibraheim Campbell. He loves to play downhill and attack the line of scrimmage. Floyd could be the Packers answer to the outside zone scheme that demolished them in the playoffs. He excels in man coverage against running backs and carries tight ends up the seam with ease. One of my favorite players in this class, Floyd would fit seamlessly into Mike Pettine’s defense.

Round 6: Mitchell Wilcox, TE, USF: Wilcox is a true Y-tight end who will obliterate safeties and linebackers in man coverage. He looks just like a wide receiver in the slot, and uses smooth routes to separate. Wilcox demonstrates sticky, powerful hands and isn’t afraid to initiate contact in the middle of the field. A new Jermichael Finley for Aaron Rodgers is a dangerous proposition for defenses. If Jace Sternberger can maintain the strong blocking skills he flashed in his rookie year, he can play the in-line role while Wilcox lines up in the slot.

Round 7: Jauan Jennings, WR, Tennessee: Jennings is a true possession type receiver. More of a move the chains guy, than a burner. The fact that he is available at this point in the draft lends to the overall ability of this wide receiver class. He provides too much value to pass up in the seventh round. 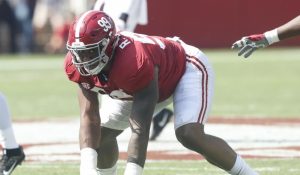