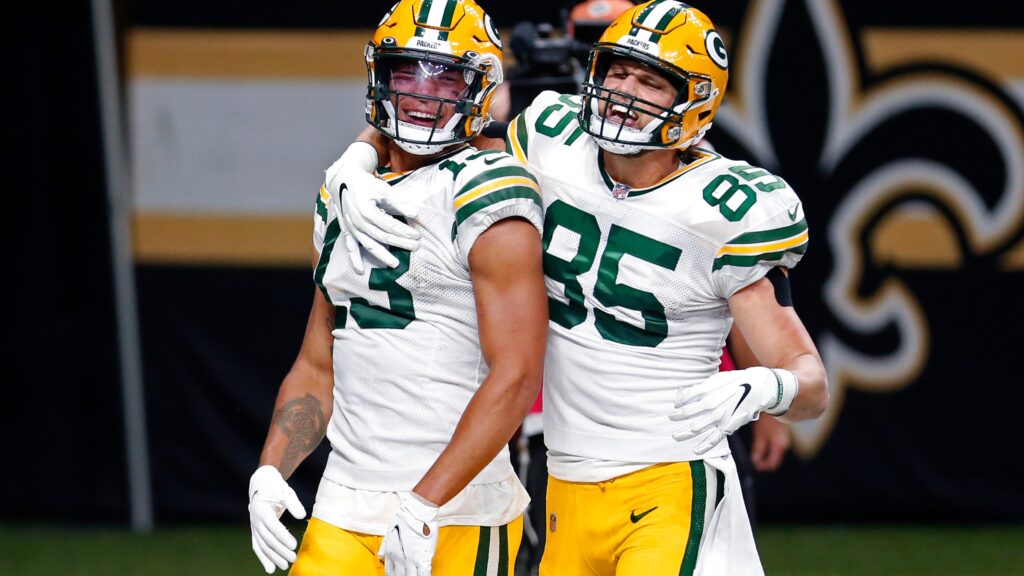 The Green Bay Packers are 4-0 and have looked better than I thought they’d look.

The Packers are on the bye this week as they get healthy, wash their hands and butts and get ready for a road game in Tampa next Sunday. Sitting atop the NFC North at 4-0, it’s been a treat to watch the amount of success and fun this team is having. In no order of importance, here are 4 observations I’ve made on the Packers through Quarter 1 of the young season.

#1: The Offense is Balling Out

The Packers offense looks smooth, crisp and in-rhythm. Most importantly, they have good players who are, for the most part, executing when their number is called. Head Coach Matt LaFleur has been an excellent play-caller, dialing up the right play in the right moment, consistently. In Year 2 of his offensive scheme, the players look comfortable; they’re not overthinking and the results are evidence of that. This Packers offense is reminiscent of their 2014 team because they are scoring and they are balanced; albeit getting results in a different style of play.

Aaron Rodgers has played at an MVP of the NFL Level. Where do I even start? He always has commanded the huddle, made adjustments at the line-of-scrimmage and gotten defenders to jump off-sides on hard counts. Those are the things we’ve grown accustomed to taking for granted for years because he’s Aaron Rodgers. What makes him MVP Level this season are the things he’s done through out his career when he’s playing at a superhuman level and we’ve seen it come back to life.

He’s been extremely accurate (something that got away from him the two years prior), he takes calculated deep-shots (and is hitting them!!), he’s been decisive (and correct with that decisiveness on his reads, decisiveness in-itself ≠ success), mobile, durable and a GREAT teammate. That’s pretty much all that needs to be said about #12.

P.S. – I’m very happy for Aaron and his newfound love of life and joyfulness. If you haven’t seen/watched any of his interviews, below is a short clip of him talking about his positive outlook of life on the Pat McAfee show. I also recommend listening to his recent interview with Jim Rome.

“I have a new and increased love of life, a lot of things have come together in the last few months that have really been enjoyable.” –@AaronRodgers12 @PatMcAfeeShow pic.twitter.com/quOaviDEmK

RB’s Aaron Jones and Jamaal Williams deserve a boatload of credit and recognition. Both of these guys have excelled in all areas of the game. They’ve run the ball well, they catch the ball like wide-receivers and they sacrifice themselves in pass protection. They’re both great teammates, exude positive energy and DON’T FUMBLE! (*knock on wood*). I think 20 years from now, we’ll look back at this duo of running backs and say “Wow, we were sure lucky to have both of them in their prime”. They’ve been outstanding.

An offensive line never gets a lot of credit – I’m talking about any offensive line that does their job well. It’s just the way it is. On the other hand, when an offensive line stinks, that’s usually when they start getting all the headlines. The group up front this year has been so damn good and so easy to take for granted.

I will say, I think the Packers could do a better job running the football as the season moves along. It’s not to say that they’ve done a poor job; Aaron Jones is 2nd in the NFL in rushing yards. However, I think the guys up front and Coach LaFleur would agree with me. There’s been a lot of carries this season that have gone for 3 yards or less, especially on 1st down. They’ve also been stymied on goal-to-go situations and 4th down and shorts. That’s an area that needs to be improved and I’m confident they will be better. We should see more of rookie RB AJ Dillon (6’0, 247lbs) in these situations as the season moves forward.

Pass protection wise, the guys have been a brick wall up front. Big shoutouts to David Bakhtiari, Elgton Jenkins, Corey Linsley, Lucas Patrick and Billy Turner. Almost all of these guys are playing at elite levels in pass protection and deserve a lot of credit for the Packers offensive success. When the offensive line is playing well, that gives Aaron Rodgers the chance to be great.

Davante Adams had 14 catches for 156 yards and 2 touchdowns in Week 1 against the Vikings. In the next game, he got hurt in the first half and hasn’t played since. Adams will be back and Adams will be dominant. Normalize saying Davante Adams is a Top 3 WR in the league because he is. He’s elite.

My dude, my guy, one of my favorite players, Allen Lazard has looked every part of a very good wide receiver in the league. He’s only getting better. He’s young, he’s big, he’s physical, he blocks, he has good hands, he can get open, he’s smart. He showed this to the world on Sunday Night Football in Week 3 against the Saints, when he had 6 catches for 146 yards and a touchdown. Unfortunately, he’s sidelined with a core muscle injury and it’s unsure of when he will return. A lot to be excited about with Lazard and his future.

Marquez Valdes-Scantling has had ups and downs through 4 games. He has great speed and he’s improving with his route running. He is inconsistent in catching the football and sometimes appears a tick off when timing an incoming Rodgers pass. I really appreciate that MVS has gotten off to a pretty good start after struggling to see the field in the 2nd half of 2019. It’ll be interesting to watch him and his potential development as a wide receiver week after week.

Lastly, it’s so wonderful to have a TE who is consistently making plays and catching the football. Robert Tonyan has been outstanding, obviously punctuated by his 3 touchdown game against the Falcons last Monday Night. Tonyan already has 13 receptions for 173 yards and 5 touchdowns on the young season. It will be fascinating to watch his development and involvement in the offense moving ahead.

#2: The Packers are Disciplined

The Packers are tied with three other teams for the 6th fewest penalties in the league so far. They’re not shooting themselves in the foot. Penalty free football is winning football.

#3: They have no real weakness

Yes, I know. The run-defense is cause for concern.

So far, the Packers are the 9th best team in the NFL in Rushing Yards Allowed Per Game, giving up an average of 105.8. Playing with a lead in a lot of their games has made teams abandon the run more frequently, which contributes to the low number of rushing yards per game allowed. However, they are giving up 4.87 yards per carry, which isn’t stellar.

Here’s the thing with the run defense. As you may know, Kenny Clark (one of the best defensive tackles in the NFL) got hurt in Week 1 and hasn’t played since. He will be coming back soon, that will help immensely. Also, we’ve seen players like DT Kingsley Keke and ILB Krys Barnes really step-up and play good football. The run defense will obviously be something to monitor as the season goes along but I felt like I needed to address that.

I already raved about the offense. The defense certainly has the personnel to have a good pass-rush and it was great to see Za’Darius Smith win NFC Defensive Player of the Week for his 3 sack game against the Falcons. The secondary is underrated and taken for granted by many in my opinion. Jaire Alexander, Kevin King and Chandon Sullivan are as good of a trio as they come. Amos and Savage are a great tandem on the backend and don’t get it twisted, we are not in the Charlie Peprah or Jerron McMillian days anymore. The Packers have a good secondary.

Also, remember the Ron Zook years as Special Teams Coach? I’m glad those are over with. I’d like to see JK Scott be better at Punter, not gonna lie. I see inconsistency with his kicks and not a lot of punts inside the 20 yard line when he has the opportunity to do so. I’m really nitpicking though. Mason Crosby is still a very accurate kicker, the coverage units look good and the return-game is reliable, I trust Tyler Ervin handling punts and kicks.

Overall, hard to find a weakness with this squad.

Easy to say a team has chemistry when they’re winning but often the two go hand in hand. Last year the Packers went 13-3 and made the NFC Championship game. They learned how to win games, even if it was ugly. This year, they’re still winning and are passing the eye test with flying colors. They might be the best team in football.

Too early to tell? Sure. I’m not complaining though.

previous post Green Bay Packers: Getting something off my chest
next post No Huddle Radio #3: Still Undefeated! A Look Ahead After The Bye
Back to top
mobile desktop