The Green Bay Packers need to re-sign Jamaal Williams and keep him in the Green and Yellow for 2021 and beyond. Here’s why signing Williams should be at the top of the Packers priority list.

Jamaal Williams was drafted by the Packers in 2017 as a 4th round pick out of BYU. Williams, who turns 26 in April, is in the prime of his career and is probably coming off his best season as a pro. Here are his numbers to date:

Jamaal “Swag Daddy” Williams is only getting better, too. In 2020, it was clear that he had an added burst in his step, something Aaron Rodgers talked about before the season.

High praise for @jswaggdaddy from #Packers QB @AaronRodgers12 on @PatMcAfeeShow : “Jamaal Williams came back and had a little bit something different.”

“Half step quicker- the agility is there- burst is a little quicker.”

“Jamaal is a big part of what we’re doing.” #GoPackGo

In 4 NFL seasons, Jamaal Williams has had the football in his hands approximately 622 times on offense (500 rushes, 122 receptions). Out of those 622 plays, Williams has fumbled on exactly 0 of them.

Williams, who has only missed 4 games out of 68 in his career, runs the ball hard, catches very well, pass protects and plays special teams (25% of snaps last season).

He’s the ultimate team player, bringing a joyful and positive attitude every day that contributes to the Packer Way. “Carry the G” has become a slogan of sorts and Jamaal Williams embodies it. He’s professional, he’s positive, he works hard and he produces. A true Green Bay Packer.

…and that’s not a knock on Aaron Jones. I wish the Packers could lock both of these players up for the next 5 years without the financial consequences. Unfortunately, that’s not the way it works.

Yes, Aaron Jones is better than Jamaal Williams. Both players are good but there’s no denying that Jones brings a….Dynamic, Explosive factor on the field in addition to his strong receiving abilities, unselfishness and high personal character.

Per Rob Demovsky, the Packers offered Jones a contract that would have made him a “Top 5 Highest Paid RB” in the league, which was ultimately declined. Jones’ 2 fumble performance in the NFC Championship game shouldn’t overshadow the excellent player he is but likely didn’t do him any favors in regards to his chances of returning a Packer.

With AJ Dillon in the wings, Jones looking for a well deserved monster contract and various positions on the roster to address, Williams makes sense over Jones.

The Packers should be in “Win Now” mode and drafting a rookie RB doesn’t support that. Yes, the Packers will be better off financially if they let Williams walk and draft AJ Dillon’s new backup instead. However, there is no guarantee that a rookie RB will be ready for the bright lights in Year 1 or even…Ever. You know the old saying “You don’t know what you got until it’s gone”.

All of the little things Jamaal does right are not “easily replaceable” skills. Knowing the offense inside and out and running the right play. Catching almost everything thrown his way. Pass Protecting. Never turning the ball over. A good attitude. Someone with an inner desire to be better. A great teammate. Established chemistry.

If the Packers want to “Win Now” but also not kill themselves in the already-tight spot they’re in financially, signing Jamaal Williams is their best option and the right thing to do. 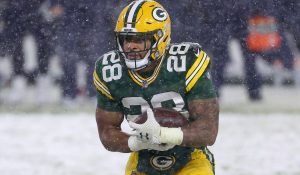