Yes, you read that correctly. The most important player for the Packers defense.. is not a defender at all. The second half of last week’s game against the Lions was the closest the 2021 Packers have resembled last years’ version that rolled to a 13-3 record and to the doorstep of a Super Bowl berth. What has become fairly clear though, is that Aaron Jones may not only be the lynchpin to the Packers offense, but the team as a whole.

The Packers most successful drives last week all came with a balance between the running game and the passing attack. Especially with more teams defending the Packers with 2 high safeties attempting to minimize big play opportunities, Jones should have the luxury of lighter boxes.

Peyton and Eli Manning talked extensively during their broadcast on Monday night about this look forcing the offense to stay patient, and not get bored with 4-5 yards per play. The Packers were able to execute this plan – their first 4 touchdown drives: 11 plays, 10 plays, 8 plays, 11 plays.

The effect that this had on the Packers defense cannot be understated. Not only does it keep the opposing offense out of rhythm, but it has become clear that this defense is best (only?) effective as a frontrunner. Forcing the opponents to be as one-dimensional as possible, and allowing for the Packers zone scheme to limit big plays and try to create turnovers when the offense gets greedy.

If Monday night was any indication, Matt LaFleur may have seen the light. A week after receiving only 5 carries and 2 targets, Jones’ workload ballooned to 23 total touches. With tougher tests coming soon – Jones may be the best chance the Packers have to cement themselves once again as Super Bowl contenders. 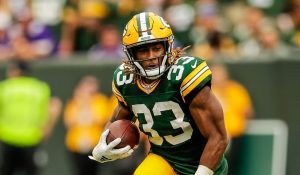 Aaron Jones May Be Packers Only Hope Against Bills

We've heard for weeks now that the Packers need to get him more involved. And ...read more

One thought on “Aaron Jones is the Packers Most Valuable Defender”