The Green Bay Packers, along with 31 other NFL teams, are well along their way into the 2022 NFL combine. The combine, which started on Tuesday, will wrap up two days from now on Monday. During that time, there’s been a few noteworthy items that have involved the Packers.

Matt LaFleur doesn’t want to be annoying to Aaron Rodgers

Packers Head Coach Matt LaFleur spoke to the media earlier this week and was asked about the potential return of QB Aaron Rodgers. LaFleur said:

“I told him, I don’t wanna be overbearing and tell him every day how much we love him and how much we want him back. So you just wanna be respectful of his space and allow him to think through everything clearly without being annoying, I guess.”

Additionally, coach LaFleur confirmed that Aaron Rodgers was part of the decision to bring back Quarterbacks Coach Tom Clements to Green Bay. Clements, who had been retired, was with the Packers from 2006-2016 and is highly admired and respected by Rodgers.

“He had a significant role,” LaFleur said of Rodgers involvement in the hire of Clements. “I would say that in terms of just our conversations over the last couple years and how much he credits Tom for his development, it was very intriguing when we had an opportunity.”

On Tuesday, Packers GM Brian Gutekunst spoke with the media in Indianapolis. Green Bay’s general manager since 2018 stated he had not fielded a “single call” in regards to the availability of Aaron Rodgers, which quite frankly, is refreshing to hear after last year’s off season. Gutekunst was asked if we’d know a decision from the QB before free agency opens, on March 16th.

“I would think we would know something before (March 16th)”, Gutekunst said.

Gutekunst also spoke on the future of WR Davante Adams, whom the Packers have until March 8th to make a decision on whether to use the franchise tag on. Also, he spoke about Green Bay’s desire to retain both LB De’Vondre Campbell and CB Rasul Douglas but is still unsure if the Packers will be able to swing it financially.

As Brandon Carwile at PackersWire outlined, the Packers met with the projected Top 3 wide receivers at the combine. Green Bay had meetings with Alabama WR Jameson Williams, Ohio State’s Chris Olave and Georgia’s George Pickens. The Packers haven’t selected a Wide Receiver in the 1st round since they took Javon Walker in 2004. ESPN’s Mel Kiper has the Packers selecting Jameson Williams in the 1st round of his latest mock draft. 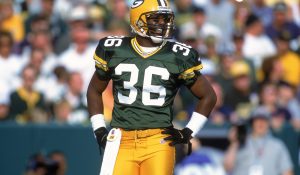