We are two positions deep into the positional 2022 NFL Draft preview, and the Green Bay Packers will be paying extra close attention to this week’s focus, which is wide receivers. With Davante Adams, Allen Lazard, and Marquez Valdes-Scantling all hitting free agency this offseason, adding at least one option in the draft is will likely happen.

This position group is incredibly deep and has a lot of first-round talent baked in, providing the Packers with a ton of options to look into, even past the first round. While the combine helped break some players away from one another, there are a ton of high-impact options to target.

Coming in at 6’2”, 225 lbs., Treylon Burks has a skillset mostly unteachable at the collegiate level. Combine that with a 4.55 40-yard dash and a 33” vertical jump, and you have the makings of this draft’s top WR prospect.

Simply getting the ball into his hands helped Burks at Arkansas, and his time roasting opposing SEC secondaries helped set him up for the NFL. As teams looking for that next Justin Jefferson or J’Marr Chase peruse over this year’s class, they should actually be looking to get the first Burks instead.

Even though he opted out of combine tests due to his ankle injury he is currently rehabbing, Drake London is still near the top of the wide receiver class this year based on what he showed at USC.

London is two inches taller but six pounds lighter than Burks, and with how highly thought-of Burks is, London is not far behind. His ball-tracking skills are unrivaled in this class and his route-running abilities are quite crisp, making him stand out for all the right reasons.

Some slight concerns lie in his lacking athleticism out of his line-of-scrimmage release and route speed, but London has plenty of skills that will translate well to the league and help him become another USC WR in the NFL.

Garrett Wilson wowed at the combine, as his 4.38 40-yard dash and 4.36 20-yard shuttle are superb results. The Ohio State product joins Chris Olave in this year’s class, and while they both shared WR duties in the offense, Wilson stands out of the two.

A bit shorter (6’0”) and thinner (183 lbs.) than the two previous players, Wilson projects as a WR2 in the NFL, which his stature fits into well. Purposeful speed fluctuation during routes and strong hands helps overshadow not-great footwork and raw route-running shortcomings, making London one of the best WRs in this year’s class and a sure-fire 1st-round selection.

Depth is the name of the game for this year’s class, and with it it could become one of the best WR classes in the last five years, a really surprising statement after how good some of the recent classes have been.

For the Packers, there is a ton of depth in a position that desperately needs reinforcements brought in – even if they continue the trend and don’t draft a WR in the first round, they have plenty of time to improve that position later on. 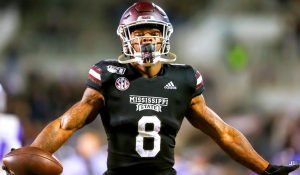 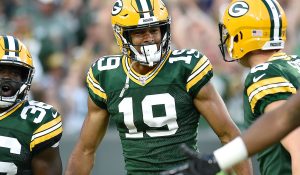