It’s hard to believe that the Packers are only 5 years removed from trotting La’Darius Gunter out to start in the NFC Championship game. The turnaround in the Packers secondary was swift thanks in large part to a total of six 1st and 2nd rounds picks from 2017-2021, including 3 current starters in Jaire, Darnell Savage, and Eric Stokes. They, combined with Adrian Amos and Rasul Douglas, have been able to turn the back end into the strength of the Packers defense. They all are able to bring slightly different skillsets to the table. But the biggest key for them this upcoming season will be their versatility.

The Packers seem to be taking a slightly different approach to their secondary, with less defined roles than traditionally seen. With sub-packages becoming the norm in the pass happy NFL, it’s obviously advantageous to have a deep stable of defensive backs. With the departure of Chandon Sullivan this offseason, one look at the Packers depth chart will show a lack of what would be viewed as a prototypical slot players.

But Brian Gutekunst clearly isn’t worried about labels, and made this clear talking to media earlier this week, saying “our entire corner group that we have right now probably could both play inside and out.” The idea of Jaire Alexander playing in the slot is an intriguing one, but Gutekunst also said he expects Jaire to follow #1 WRs next season. These ideas can simultaneously be true however, as the NFC has many teams with elite slot receivers. Cooper Kupp, Chris Godwin, Justin Jefferson, Deebo Samuel all do a lot of their damage from the slot.

The one hesitancy many have with playing Jaire inside is holding up as a tackler, especially after his shoulder injury last season. But the Packers are clearly comfortable with their other options. They could indeed put either of Rasul Douglas or Eric Stokes in the slot. But another option they have is with Darnell Savage.

The idea of Savage assuming the “star” role was a popular one an offseason ago. But it never materialized during the season. And it seemed like Savage was playing out of his natural role a lot. They would likely better be able to optimize his talent by taking him into a slot role. This would allow them to keep Jaire on the outside, or even utilize both Savage and Jaire inside, and Stokes and Douglas on the perimeter in dime packages.

The Packers will be tasked with slowing down some prolific passing attacks next season. Joe Barry’s philosophy is based around playing light boxes and preventing big plays. But Green Bay has the chess pieces in place to be one of the most shut-down units in football. 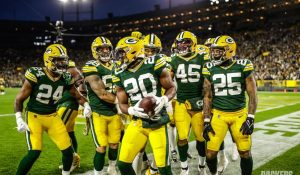 Is Joe Barry or Jerry Gray to Thank?

Well, my fellow Cheeseheads, this is it. Your Green Bay Packers have a shot to ...read more