Wednesday marked the official return to practice for Jaire Alexander, albeit in a limited fashion. He participated in individual drills, his first on-field action since injuring his shoulder in Week 4. His return should be a boon for a pass defense that has been top 10 in passing DVOA, QB rating allowed, and interceptions. The question that Joe Barry will face, however, is how best to deploy Alexander when he makes his return to game action.

A lot was made with Barry’s hire about the importance of the “star” position, aka the nickel back. This was popularized with the way the Rams were able to utilize the skill-set of Jalen Ramsey in the same defensive scheme. The Packers have used mostly Chandon Sullivan in this role so far, with mixed results. Injuries in the secondary have limited the Packers ability to mix in other corners, but after the bye – it should be worth exploring other options.

The signing of Rasul Douglas has been a pleasant surprise for Green Bay, and it would be tough to send him to the bench with Alexander’s return. Kevin King also returned to practice on Wednesday, and when he has been healthy this season, has been better than Sullivan.  The Packers have significantly better depth at outside corner than in the slot – with King, Douglas, and Eric Stokes all playing well. Moving Jaire inside would allow the Packers to have their best 11 on the field – Douglas and King both have PFF grades of 68 this season, with Sullivan coming in at 56.4.

Looking towards the postseason, and having Alexander in the slot could also be beneficial given some of their potential playoff match-ups. Many of the NFC playoff contenders all have elite slot receivers – from Cooper Kupp to Chris Godwin, Ceedee Lamb, and Deebo Samuel. Teams are beginning to take advantage of Sullivan and the middle of the field, like on Van Jefferson’s 79 yard touchdown in the Packers last game against the Rams. With the stakes rising and the regular season winding down, having Alexander locking down the middle of the defense might be key in returning back to the Super Bowl for the first time in 11 years. 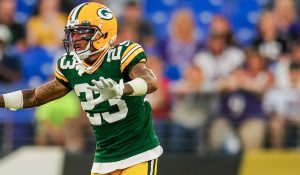 The guys talk about Kenny Clark and Aaron Jones' updated contracts and what it spells ...read more

4 thoughts on “Should the Packers Put Jaire Alexander in the Slot?”