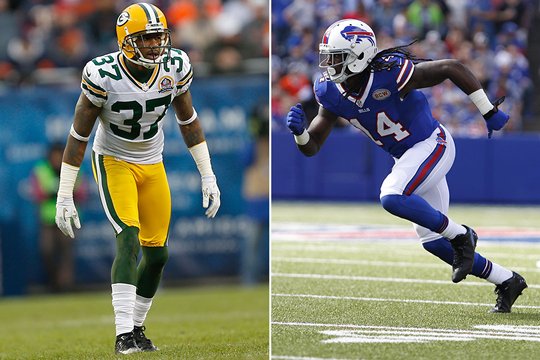 Last week the Green Bay Packers hung on to win against Atlanta 43-37 after giving up 20 points in the fourth quarter. While the offense was in rhythm against a poor defense, the defense started the game strong against the eighth ranked offense in the NFL before crumbling in the second half as Julio Jones reel in eleven receptions for a ridiculous 259 yards and one touchdown. This can mostly be linked to defensive coordinator Dom Capers consistent plan this season to single cover elite wide receivers, something that did not pay off week four against Calvin Johnson and did not last Monday against the Falcons.

As for the 7-6 Buffalo Bills, they traveled to Denver and lost a tough one 24-17. The Bills hold to fringe playoff hopes and face a must win in their last home game of the season this week against the Green Bay Packers.

Spoiler: This is very unlikely to happen this week

This is not going to be an easy task for Green Bay this week. They hit the double whammy of weaknesses this week for the offense. First, they are on the road where they have not played nearly as well as they have at home, having only scored over 30 once on the road, which was against Chicago week four. Two, they go against the best defensive line in football, with three of the four lineman having at least 9.5 sacks and the fourth was a Pro Bowler last season, not to mention that the rest of the defense is good as well. Buffalo as a team leads the NFL in sacks. Marcell Dareus and Kyle Williams very well could be representing the AFC Pro-Bowl squad at defensive tackle. Defensive ends Mario Williams and Jerry Hughes could also be going to Hawaii for the Pro Bowl.

Having said that, the best way Green Bay will win this game is by taking long, time consuming drives to wear out the defense. If the Packers are able to grind out key yards in the running game and get to third and short, it will leave Rodgers with enough options on progression reads to churn out first downs. This is the most likely way for Green Bay to come out of this with the win.

Buffalo will not need to blitz Rodgers, they will pressure him with just their front four and be able to drop everyone else in coverage, which has been the only way to consistently slow Rodgers down over the years. Buffalo’s defense is incredibly similar to the Detroit Lions, and that team held the Packers to only 7 points while the Packers were on the road.

Buffalo will be playing safeties back all day to prevent the big plays from Nelson and Cobb so Rodgers will have to make most of his throws in check down reads, some of which will go to Cobb & Nelson on shorter routes such as slants, but mostly this means that Adams and Lacy will have to have big games catching the ball on the check downs to keep the drives going.

Another strength going in for the Packers is Buffalo’s defense has kept drives short by forcing turnovers, they come in second overall with 28 takeaways but the Packers rarely turn the ball over, having only eight total on the season. Rodgers only has three interceptions and they all have come off of the intended receiver’s hands, so his accuracy is unparalleled right now. If the Packers can hang on to the ball, they will win this game through attrition, like they did against New England. They should be able to put up enough points to win, as long as the defense gives a bounce back performance.

Packers’ Defense vs. Bills’ Offense:
Last week, through two quarters the defense continued its stride as a defense on the rise. Then in the second half the Falcons, specifically the combination of Matt Ryan to Julio Jones, picked them apart. Part of this blame falls on defensive coordinator Dom Capers who rotated one on one match ups on Julio Jones throughout the game and did not provide safety help let alone blanketed coverage. This lead to the monster game Julio Jones had and gave the Packers an unneeded scare considering they had appeared to have locked the game up at half time and suddenly found themselves in a situation where they could have chocked it away on Monday Night Football.

This week, Green Bay gets a little chance for redemption because Buffalo has a tough receiver matchup in Sammy Watkins. Watkins is having an up-and-down rookie season, mostly due to mediocre-at-best quarterback play from Buffalo. Last week Watson showed why he was such a touted prospect coming out of college grabbing seven catches for 127 yards. The four previous games? A combined 105 yards on thirteen catches with only one touchdown. Then the two games before that he had back-to-back 120+ yard games, so to say he is up and down is a bit of an understatement. Most of the fault for this can be placed on Kyle Orton, who took over after EJ Manuel struggled in the early part of the season. While Orton has been more than serviceable for Buffalo (his 89.2 QB rating is good for 17th), he is no Matt Ryan and at this point Watkins is no Julio Jones. Remember Atlanta is 8th in total offense, Buffalo ranks 22nd. Green Bay will have an easier time this week than they did last week, but it will be key for them to get early stops and turn overs because points will be at a premium in this game. If they can hold Buffalo to 21 points or fewer points (they average 21.6 on the season) then Green Bay will walk out of Buffalo with their first win there ever. Any more than that and it can get dicey, especially with the defense the Packers are playing.

Fortunately, the Green Bay Defense has continued to look much improved against the run with Clay Matthews moving to middle linebacker. Forcing Buffalo away from the run will be huge today, as they offense is not close to as explosive as Atlanta’s. Stopping the run and getting Rodgers more opportunities will be more important in this game than most due to the uniquely talented defense they face this week.

The Weather Factor:
The expected weather for the game is 38o, cloudy, with light winds, and virtually no chance of rain.

The Game:
This week, it is strength on strength as the Green Bay Packers offense looks to try and capture their first ever win in Buffalo against the very talented Buffalo Bills Defense. As good as the offensive line has been recently, I expect Buffalo to get to Rodgers at least twice. The Bills defense will keep the game close baring a massive mental collapse from them, which seems unlikely as they still have something to play for. The Packers will do better this week than they did in Detroit simply because of how well the team has jelled in recent weeks. Having said that, this game comes down to the Packers defense. If they can stop Orton, which may sound silly but he did shred the Packers last time they played when he was in Kansas City and handed Green Bay their first and only regular season loss during the 2011 season when the Packers finished 15-1. The defense is much improved from that group that was dead last in the league, but the door is open for Orton to try and mimic Ryan-to-Julio with Orton-to-Watkins. I expect the defense to play with a chip after being embarrassed like they were last week. Green Bay squeaks by in this one 24-20 over Buffalo, but it will be a nail biter.

Eddie Lacy, Davante Adams – Short passes will be the name of the game. Nelson and Cobb are must starts but their big plays are limited, which probably hurts Nelson’s upside a bit more than Cobbs.

Sammy Watkins – While he should not reach Julio Jones numbers, Capers continually does not show fear of talented wide outs and it burns him. This is a tougher call to say because potential bad quarterback play negates the decent start spot.

Kyle Orton – If you are in desperate need of a quarterback, do not look here. The Packers are a turn over heavy defense and will be looking for some vengeance after last week’s embarrassing finish.

Packers tight ends – too risky against a defense that may only give up 2-3 touchdowns in total today.