It has been a month since the Packers came away with a “W” (fortunately, not a Jameis Winston kind of “W”). By this point, the Packers would take any kind of “W”. For those who ordered an ugly, sloppy “W”, you got your wish from the contest that somewhat resembled a football game at Solider Field.

There’s no need to pull a Michael/Martellus Bennett and lie about it. This tweet from beat reporter Aaron Nagler essentially summarized the Packers’s offensive performance up to that point.

There was nothing the Packers did that inspired confidence toward salvaging the season until 5:29 to go in the 4th quarter.

Then suddenly, after another afternoon filled with checkdowns, mental errors, and sloppiness, Brett Hundley channeled his inner Aaron Rodgers and nailed Davante Adams at the pylon with a beautiful, back-shoulder throw off a scramble. It was a hell of a throw for any professional quarterback. That one throw may have given the season just a shred of hope after a disastrous month. Rodgers was beaming with pride on the sideline, as if his own son had just made that throw. He looked like a Jedi master finally seeing his apprentice break through, like a Obi Rodgers Kenobi.

If Hundley’s pass was a confidence builder, then he’s going to need to keep building confidence like it’s falling out of style. The defense, while allowing only 16 points, showed nothing that inspires confidence against a quality opponent in January. The Bears only scored 16 points because their offensive played horrendously. They allowed five sacks against a defense that provides a pass rush as often as Michael/Martellus Bennett tell the truth. None of those sacks were coverage sacks either. Each sack would not have happened against an upper tier QB either.

Against an offense with zero depth at WR, the Packers continued to leave soft gaps in coverage that would have been shredded apart any any decent quarterback. The sacks piled up solely because of Mitchell Trubisky not getting rid of the ball after five seconds and/or a wideout from arguably the worst receiving corps in the league not getting open.

Play of the Game 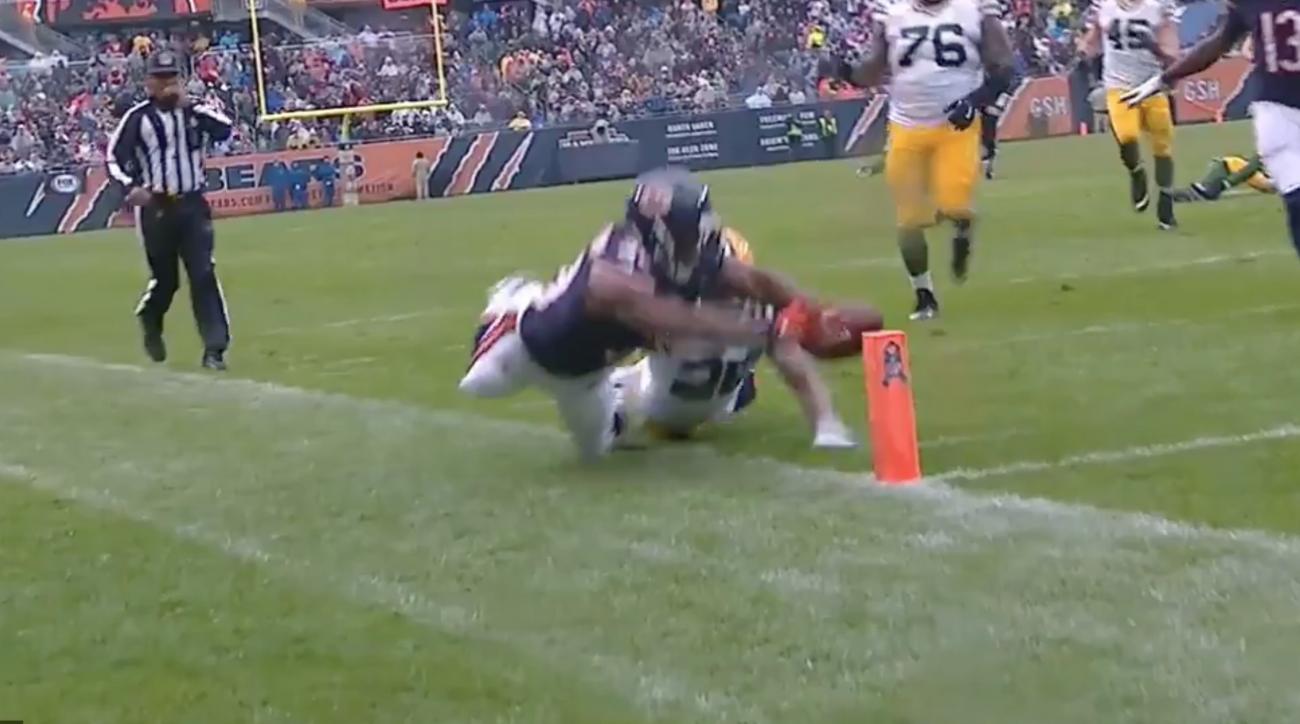 Benny Cunningham breaks loose on dump off from Trubisky and dives for the pylon. The refs rule him down short of the goal line. The fans in the stands scream for a challenge. They get their wish. The play is reviewed, and the commentators gradually begin to realize that Cunningham is not short, nor did he score. At the last second, the ball clearly comes loose and is out of his control by the time it brushes the pylon. The referee returns from the review and announces a touchback. The Chicago Bears managed to turn the ball over on their own challenge. It was hilarious, and couldn’t have been more Bears-ish.

Player of the Game

This one is no contest. There was one Packer that played with balls, and it wasn’t even close. Jamaal Williams, an afterthought once the regular season began, ran like a man among boys. With Aaron Jones and Ty Montgomery sidelined, Williams ran through Bears defenders like they owed him money. Nearing the two minute warning, Williams bulldozed his way through multiple Bears for a 4 yard gain and a crucial first down. It was the most punishing run of the season. Jamaal Williams played like a man, and every other Packer, especially those on defense, should take note.

In conclusion, a win is a win, no matter how pretty. A plethora of things still need to go their way, but the Packers showed the world they still have a heartbeat for at least another week.

7 thoughts on “Packers Sort of Inspire Promise-ish…Kind Of”