The Green Bay Packers’ defense is sorely lacking in impact playmakers, but they seem to have a star in the middle of the defensive line.

Kenny Clark made some splash plays on Sunday against the Bucs, recording his first two career sacks and causing the fumble Dean Lowry returned for a touchdown. But it is not the plays that show up on the stat sheet that make Clark so valuable. When watching the tape, I consistently see Clark eating up double team blocks. He does a fantastic job of not just engaging the defenders, but moving them to allow his Linebackers to make plays. Blake Martinez is freed up to make a lot of tackles because of the great work of Kenny Clark (with assists from Mike Daniels, Lowry, and Quinton Dial). 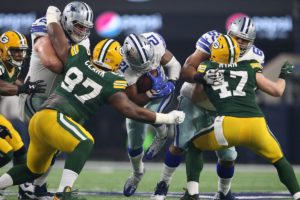 He is the unique blend of size, speed, and strength. You can see his wrestling background shining through in his ability to leverage the o-line.

Clark is on the precipice of becoming a dominant 3-4 NT in the line of Haloti Ngata and Casey Hampton. And having just turned 22 in October, Clark is going to give the Packers the foundation to rebuild their defense around for years to come.

2 thoughts on “Kenny Clark is a Pro Bowler”