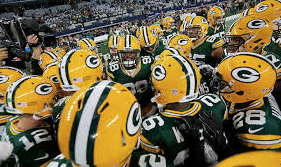 When you have arguably the best quarterback in the National Football League and he goes down to injury half-way through the year, it makes gauging the season a tad difficult. Having said that, the Packers have a recipe for success and with #12 coming back next year, look for the Packers to challenge the Vikings in the NFC North right away. Besides the obvious, here are three reasons why I see it going this way.

Reason #1. The Packers, through no choice, found an adequate running game after Rodgers went down. Between the thunderous style of Jamaal Williams and the lightning-quick strike ability of Aaron Jones, Rodgers should have the threat of a legitimate running game when he returns full time. There are plenty of other teams who utilize this 1-2 punch in their offensive schemes, with the New Orleans Saints and Minnesota Vikings coming to mind.

Reason #2. The Packers basically got little out of this draft class but some of these guys are destined to make the well-noted “year 2” jump. Most notably, one such player is Kevin King on the outside. King showed great promise this year and he did it in spite of a severely injured shoulder. This kid basically played on one arm this year. He was easily the most athletic cornerback with the length, speed, and strength to jam the receiver and get him off his route. Another player destined to show a lot more in his sophomore season is Josh Jones. Jones appeared to play his best football near the line of scrimmage but was often out of position in coverage. Look for this physical specimen to be more sound in his second season. He, along with King, will vastly improve a secondary that is in dire need of improvement.

Given these three reasons, the Pack will be back in 2018. Book it.