A common, though not a majority opinion of fans is that Ty Montgomery should move back to Wide Receiver for the Packers. This is nonsense, and is based on the misconception that WR is his natural position and the lack of weapons at the WR position dictate putting more resources in that area. While the Packers need help at Wide Receiver, it would be a mistake because he isn’t a good Wide Receiver.  And most importantly he could play a valuable role in the offense as a hybrid type, receiving running back.

As the cliché goes, the NFL “is a copycat league,” and surely McCarthy and Philbin have been watching the playoffs which feature team after team who utilize their running backs far more than the Packers in the passing game. Out of the eight Divisional Round teams, six of them utilize a running back prominently in the passing game, the only two who don’t, Jacksonville and Tennessee are the two worst offenses of the eight.

The most obvious element this would provide is it would allow the Packers to isolate Ty in a good matchup vs man coverage, in particular a linebacker, which would most likely be the case in any man to man situation. A variety of routes can be used whether it be out of the backfield or if he is motioned to the slot or out wide. The biggest value may out of the backfield as the defense would be less likely to make checks that would avoid them having a difficult matchup at the line of scrimmage. They can even be deep balls (which the Packers desperately need) or they can be your run of the mill routes to the flat or option routes in the middle of the field.

Here are a couple of examples:  In this video Kareem Hunt runs the wheel route. It’s a slow developing play but Montgomery would win this matchup in similar situation, most of the time.  As long as the play has time, it can be effective against the right coverage.

The other is a simple option route by Alvin Kamara. If you watch the play, Brees knows it’s Cover 2 Man and he obviously likes the matchup of Kamara vs the Middle Linebacker. The key is that he doesn’t have any reason to keep Kamara in to block as it’s a four-man rush. He checks and communicates something to Kamara, presumably the route, which appears to be a simple option route. You can tell he wants him the whole way. The LB is a deer in the headlights.  Kamara is special but Montgomery could win in this situation against most LB’s.

The other, and as important element, is that as a zone beater. Most of the time this is in the form of the check down. There is no shame in it. In fact, it is a great way to accomplish a couple of things. It will keep their zones more honest by keeping the linebackers from getting as much depth as they should which will open up the 2nd level. Also, it will make them less likely to play zone in short to go situations.

The best example of this is James White in the Super Bowl. Notice that in the first half, most of the receptions were in man to man situations (always a LB), but in the 2nd half as Atlanta’s defense, wore out they played a lot of Cover 3.  It was easy money time and again. (It wasn’t because of the prevent D as it may seem, since many of them were in the 4th quarter and OT, when the game was close)

What this all adds up to for Montgomery is a game like his debut at Running Back last year, week 7 against the Bears.  See the video below.  Notice he clearly has an advantage when matched against a linebacker, does okay vs safeties and is productive vs a zone which include a few first down pickups on short/medium situations. Nothing fancy, just productive. This video also shows something that is most often overlooked by those critical of Ty; He has skills. You can see his wiggle, his acceleration with the ball and his pass catching ability. This game is how he should be used to a T, albeit in limited touches per game.

Though his numbers were down a little this year with 3.8 yards/carry, his career average is a solid 4.9 yards/carry. Early in 2017, he was being used far too much. He had 59 touches in the 1st three games. For him, less will be more. And he is an effective enough ball carrier to keep opposing defenses honest and treat him, personnel wise, like a running back.

This is not to say that this should be the offense or a main part of the offense. There will be times against teams who have very athletic LBs that will be able to cover one on one and they may be fast enough to rally to the ball in zone situations. But it should be a tool in the tool belt. It should be something that it utilized against teams that struggle to defend RB’s, that have a LB that one knows can’t cover or another factor regarding coverages whether in film or in game.

The league is always changing and a running back used in such a way by the Packers is long overdue. James Starks had that ability to an extent, and he had his moments. But the likes of Sproles, Woodhead, McCaffrey, Kamara, James White or Dion Lewis, add another dimension to any offense. And if you have the personnel to utilize it, as the Packers do, you are leaving your plate only half eaten if you don’t feature.

This group of Running Backs could be the most talented and dynamic group of McCarthy’s tenure, because each of the three of them present a different skill set; In addition to Montgomery, Jones is explosive, elusive and runs with great vision and should be the primary ball carrier. He has a chance to be special. His 5.7 yards per carry is off the charts he had the 3rd highest DVOA (statistical metrics by Football Outsiders that measure a player’s productivity relative to the average at the position). Williams, in addition to being a bruiser worthy of some carries, is a great pass protector and there has always been a role limited to just that for that in the McCarthy offense, ala Brandon Jackson and John Kuhn. Gutekunst will most likely add a couple more pieces, but they won’t have to use much capital whether it be through the draft or free agency. If, and this is a big if, the three of them can stay relatively healthy, this can be a dynamic and explosive group if utilized correctly, one that is a focal point of the offense. 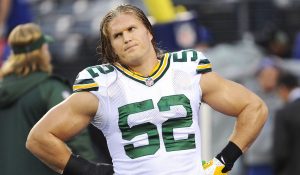 Good morning Packers fans! Most of us can't wait for the NFL football season to ...read more