Good morning Packers fans! Most of us can’t wait for the NFL football season to start. We sit every Sunday watching our beloved green and gold take the field. Throughout the season, we also experience some embarrassing moments. Yelling at the top of our lungs, jumping up and down and pacing back and forth are common occurrences. Sometimes it takes a little while for the dust to settle and we can think rationally again. The last article I wrote talked about 3 rants I have concerning the Green Bay Packers offense. This edition will focus on the same, however, the focus will turn to the defensive side of the ball. Here are my 3 rants of the Green Bay Packers defense:

Reason #1: The Packers are not fundamentally sound tacklers. “What the hell’s going out here? Everybody grabbing out there. Nobody tackles….”

Vince said it then and he would definitely say it now. The Packers need to get back to the fundamentals of tackling the football carrier. Too many guys in today’s NFL want to go for the kill shot and consequently give up bigger chunks of yardage than they have to. If the Packers are to take the next step on defense, they need to break down, keep their head up, wrap up the ball carrier, and drive them to the ground.

One of the most impressive teams this last season in terms of tackling is the Philadelphia Eagles. It’s no wonder why they are in the big show. Watch the Eagles rally to the football and tackle with fundamentals. Right now, it’s night and day between their club and ours.

Reason #2: The Packers lack an outside pass rush. The Packers have Nick Perry and Clay Matthews as their bookends. When they are on the field and healthy, they are a formidable duo. The issue is that both have consistent nagging injuries which has kept them off the field. In order for the Packers to take another step, they are going to need to generate a pass rush. Hoping for health with Perry and Matthews seems a bit of a stretch so Green Bay will likely need to address this through the draft and/or free agency. We also need to remember that Vince Biegel may take a strong leap from year 1 to 2 so he may be a contributor as well. Look for the Packers to go after one of the premiere pass rushers in this year’s draft. If that’s where the focus goes, the pick must come in and get close to double digit sacks and many pressures. Quarterbacks in this league will pick apart any secondary if they have ample time to sit back and scan the field. We call know that Mike Daniels and Kenny Clark can provide an adequate push up the gut to get a quarterback off the spot. The issue remains if anyone can get the outside pressure. Time will tell. If the answer is no, we will have the exact same result as we’ve had lately. Einstein said it best with his definition of insanity. “Doing the same thing over and over again while expecting a different result.”

Reason #3: The Packers cannot cover the middle of the field. Whether it’s Greg Olsen of the Panthers running free or Stefon Diggs running a crossing route, the middle of the field against the Green Bay Packers seems to always be open. At what point can the Packers recognize that teams make serious hay by simply keeping the ball between the hashes? Ever since Capers has been the defensive coordinator, take away the Super Bowl-winning Packers defense, this has been an issue. With new coordinator Mike Pettine at the helm, will this issue linger or get resolved? I would absolutely love it if we could take away the middle of the field and force teams to go outside-in like most good defenses do. In my opinion, it starts with team speed and follows with scheme. The Packers definitely added speed last year with King and Jones, however, there still is a ways to go in that regard. Simply put, this team needs to get faster. In addition, it’s up to Pettine to put these guys in a position to be able to take away the middle of the field, where many of the big chunks get made.

Do you agree with my defensive rants? What did I miss? Let me know what drives you nuts when it comes to the Packers defense. 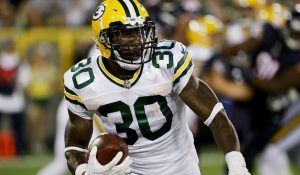 Dealing with the Packers' Running Back Situation

Across the duration of the 2017 regular season, the Green Bay Packers, as a team, ...read more