As we get nearer to free agency, and things in the NFL landscape become clearer, I like to take a look at what the Green Bay Packers might do this offseason. I’m going to be running several simulations of renegotiations, cuts, re-signing, free agency, and the draft.

Randall Cobb – I believe a fair offer is 4 years/$6 million per. That drops his cap number to around $4.2 million for 2018 which is a decent savings and keeps him in Green Bay through his prime.

Jordy Nelson – I’d give Nelson 4 years/$8 million per. That would drop his cap number to around $6.0 million for 2018. That’s a fair market offering, and may allow Jordy to retire as a Packer.

Aaron Rodgers – Rodgers will never earn his true value to the Green Bay Packers in his salary, but I think it would be fair for them to give him the richest deal in NFL history. 5 years/$150 million with half of that guaranteed would surpass Jimmy Garoppolo’s deal by a significant margin (and likely Kirk Cousins new deal) and still leave the Packers with an average cap charge of $30 million/year. They could structure that however they wanted. Rodgers may keep that number low for the first few years, so Green Bay can spend it on some free agents. They can always renegotiate to increase flexibility later. For this simulation, we’ll make it a cap hit of $30,000,000 for 2018.

TE Lance Kendricks – Cap Savings: $1,625,000. This would mean the Packers would have no returning Tight Ends, but it looked like a position that needed a drastic overhaul.

S Morgan Burnett – 3 years, $8 million/year. I think Burnett is going to be one of the key pieces to Pettine’s defense. I’ve heard higher numbers floated, but this is what I put Burnett’s value at. I could see him testing the market, and then resigning with Green Bay.

CB Kyle Fuller – 4 years, $7 million/year. Fuller hasn’t developed into the elite CB he seemed on target for after his rookie year. However, he’s still good, young, and may perform better in a winning environment. Plus they can take him away from their arch rivals.

DE Muhammad Wilkerson – 4 years, $7 million/year. Wilkerson will hope to regain his dominance after rejoining his first NFL D-Coordinator, Mike Pettine. A front of Daniels, Clark, and Wilkerson could be the best in the league. The first step to fixing the defense is finding a pass rush, and Wilkerson will go a long ways toward that goal.

QB TJ Yates – 2 years, $1.3 million/year. Yates brings starting experience and the type of athleticism to mirror Rodgers in practice. If nothing else, Yates will push Hundley in the offseason, but he’d likely be his replacement.

TE Crockett Gilmore – 3 years, $2 million/year. Gilmore will bring a veteran pass catcher to a now empty Tight End position. He is a red zone threat and a solid blocker. He will be a good stopgap, until Green Bay can develop a rookie.

TRADE – The Packers trade 1-14 and 2-13 to the Buffalo Bills for 1-21 and 1-22. The Packers would be able to draft 2 difference makers and the Bills could move up far enough to draft their QB or a WR. According to http://walterfootball.com/draftchart.php the values for the picks are nearly identical.

1st – 21 ILB Tremaine Edmunds, Virginia Tech. A lot of great defensive players are getting pushed down the draft boards because of the love affair with this year’s QB class. That’s one reason I’m a proponent of acquiring more picks. Edmunds is long, crazy athletic, and has the ability to cover TEs and RBs. He can be a good late blitzer, and his length is going to give QBs fits in zone coverage. With some added strength and improved instincts he could become a Brian Urlacher type player.

1st – 22 DE/OLB Marcus Davenport, UTSA. Davenport is a bit of a project, but he is big and also an incredible athlete. Early on, he’s going to be reliant on his speed and power to get to QBs, but as he develops his pass rush repertoire, he could quickly become a terror to opposing offenses.

3rd – 12: TE Mike Gesicki, Penn State. Gesicki has all the tools to be a really good pass catching Tight End. He will be a liability as a blocker, but he has the speed and size of a really big receiver, and Aaron Rodgers needs someone to stretch the middle of the field.

4th – 14: RB Kalen Ballage – Arizona St. He’s a freak of size, speed, and elusiveness, but he was not used a lot at Arizona State. Ballage could end up being a bell cow back in the mid-rounds, but he’ll definitely steal carries away from Aaron Jones and Jamaal Williams as part of a very good RB unit.

4th – 33: CB Holton Hill, Texas. Hill is a tall/athletic corner. He’d likely be taken much higher, but he was suspended for the remainder of his Senior season for violating team rules. Late in the 4th, he’s worth the gamble.

5th – 13: LB Shaquem Griffin, UCF. I’d be fine taking Griffin higher than this. People will concentrate on him having one hand, but he’s so athletic and such an instinctive football player. He’s the kind of player who will make it impossible to keep him off the field. At a minimum he’s one of the best Special Teams players in the league, but I think he’ll be a guy who can cover any RB or TE, and also give OTs nightmares with his speed off the edge.

5th – 35: WR Equanimeous St. Brown, Notre Dame. Besides being the best name in the draft, St. Brown is a fantastic athlete and a fantastic person. His father is a former Mr. Universe who has pushed his children to be great at whatever their passion is. Equanimeous has had the diet and weight training regiment of a professional athlete since he was in elementary school. He also is a 4.0 student and speaks 3 languages fluently. If Notre Dame had better QB play, St. Brown would be a 2nd rounder, and the Packers are going to feel fortunate he fell to them.

5th – 37: OT Brett Toth, Army. Toth is a guy who has the potential to be a Tackle in the NFL. Being a West Point grad, character will be a huge plus, but he has the athleticism to be a good Right Tackle if he can improve his strength. He’ll be a developmental player because he’ll have to serve out his commitment to the Army before beginning his pro career.

6th – 12: G Skyler Phillips, Idaho State. Phillips has huge arms, and gets the bouncer label from many scouts (because he’s “throwing guys out of the club”). He’s got some work to do in holding up in pass protection, but he can absolutely handle the run blocking duties early. If he can learn to maintain blocks instead of trying to devastate everyone with his initial punch he can be a starter in the league.

6th – 33: S Dominick Sanders, Georgia. Green Bay probably doesn’t need another Safety, but Sanders seems like a really good value at this point. He incredibly instinctual, and was a 4 year starter at Georgia. He’s lacking in the size and speed categories, but makes up for it by making plays on the ball. He’ll have a hard time making the team with all the depth at Safety, but he’s the kind of player Mike Pettine would love to develop.

7th – 14: TE Tyler Conklin, Central Michigan. Conklin is a basketball convert who has great catching skills, but also likes to get nasty in the run game. He was hurt for most of his Senior campaign, so he might drop to the 7th round. If he can stay healthy, there is a ton of upside.

7th – 21: TE Chris Herndon, Miami. Herndon is a terrific athlete, who has struggles with blocking. He could be a guy to stretch the middle early, and hopefully develop to be a more complete player.

Having such little remaining cap space left seems like a problem, but with the potential for Clay Matthews and Bryan Bulaga to come off the books after the 2018 season the Packers can afford to spend more this offseason. 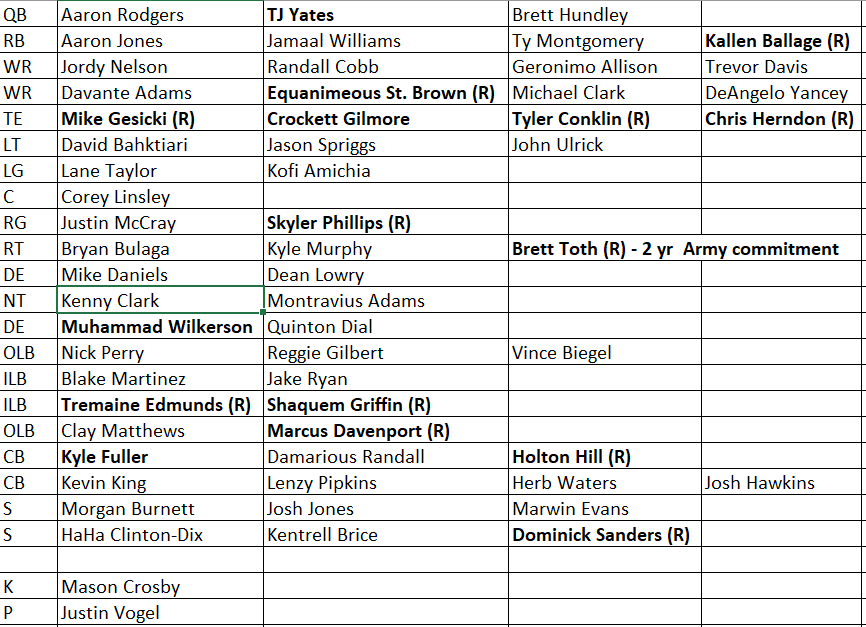