There was a flurry of stories last week. By now, I am sure that everyone has had the opportunity to read the Mike McCarthy interview by Rob Domovsky and the Bleacher Report article by Tyler Dunne. Both were extremely well-done pieces.

The question remains, who is at fault for the dysfunction and fall of the McCarthy/Rodgers Green Bay Packers?

There are a variety of opinions on this topic. There was a lot of damning information about Mike McCarthy and Aaron Rodgers in the Bleacher Report article. Where there is smoke, there is usually fire.

The Bleacher Report article states that Rodgers felt McCarthy had a low football IQ. Do I think McCarthy has a low football IQ? No, I do not. Did the game pass him by? I don’t know. Did his offense become stale? It certainly did. He did not make adjustments or evolve the offense.

Does Rodgers freeze our teammates? He most certainly does. He sometimes also plays hero ball, waiting for the deep play instead of taking what the defense gives him and keep moving the chains.

If McCarthy was truly getting massages during team meetings, and his offense was getting stale, than he should have been fired several years ago. If Rodgers was being insubordinate and not a good locker room guy, well you are not going to fire him, but a message should have been sent.

The demise of the McCarthy/Rodgers rests with Ted Thompson. On May 4, 2019, the Green Bay Packers Hall of Fame will induct Ted Thompson. Rumors are swirling that Ted will not even be at the event due to his health has deteriorated. If his health has gone downhill that fast in a year, then Mark Murphy should have stepped in years before and moved on from Ted.

The past few seasons the Packers did not have locker room leaders or players in the locker room who policed themselves. He was expected that the coaches will do that. Where as, before they had guys like TJ Lang, Josh Sitton, Charles Woodson, B.J. Raji, Julius Peppers, and Donald Driver. Year after Year, Ted let veterans walk out the door and replaced them with rookies. The team kept getting younger and younger with no real veteran presence.

Sure he kept the team in contention for the playoffs every year but that is about it. They did not have the veteran leadership and talent to win a Super Bowl and become a dynasty. Ted left the cupboards bare. He did not provide McCarthy with the tools he needed to bring the Lombardi Trophy to Green Bay year after year. He put the fate of the organization in Aaron Rodgers hands without providing him with talent on both sides of the football to win in the playoffs. Often Rodgers was left to play hero to save the day.

If half of the stories in the Bleacher Report are true there was clearly dysfunction in the organization. Mark Murphy should have stepped in sooner instead of worrying about his sled hill. Murphy is the defacto “owner” of the Green Bay Packers. The article states that people across the organization k about the problems that were going on. This was not something that just rose during the 2018 season, it was something that was going on for several years.

Murphy should have sent a message by forcing Ted to fire McCarthy sooner and replacing Ted sooner. By turning a blind eye to all of the issues, he essentially sent the organization back years and failed to help deliver more than one championship to Green Bay. With this much dysfunction going on in the organization, it’s possible that at least one member of the Packers board of directors heard about the issues. So, why didn’t one of them say anything to Murphy to clean-up the house? He reports to them.

One of the most telling quotes from the Bleacher Report article is Murphy tell Rodgers, “Don’t be the problem”, when he informed him who he selected to be the next head coach.

Murphy has seemed to have sent a message to the team. A little too late but hopefully this will turn the organization around. The failure to deliver more than one championship and allow dysfunction rests with Ted Thompson and Mark Murphy. 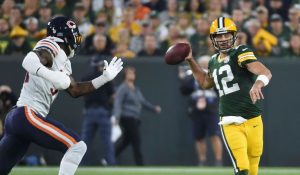