The 2020 NFL season marks the final guaranteed year of Kevin King’s tenure with the Green Bay Packers, as his rookie contract hits its final year. Coming into a season that also will see the likes of Kenny Clark, Aaron Jones, David Bakhtiari, Corey Linsley, and Jamaal Williams, among others, playing in the final years of their current deals with the team, King may be pushed down the list of resigning importance, which could potentially have ramifications that see him leaving town.

When the Packers used the first selection of the second round on him (after trading back with the Cleveland Browns), King’s career as a Washington Huskie was very intriguing, especially for a team that was lacking a solid corner that could operate in space. While the first two years of his career were marred with injuries, the third season was exactly the reason why the team drafted him, which is what they are hoping he is able to produce in Year 4 as well.

Across his first two seasons, he combined to play in only 15 games, which is the same amount that he played in 2019 alone, showing that he potentially is moving past the injury bug that followed him early in his NFL career.

His 812 snaps in ‘19 represent an increase of 126 snaps if combining his first two seasons together and comparing them to last year alone, showing that King’s training and upkeep of his body was something that played a key part in keeping him on the field for more snaps, giving him the chance to make more plays.

Five of his six career interceptions came last season as well, as did his lone forced fumble, so he was able to get his hands on the ball a lot more often than previously, showcasing his skills and making teams need to pick their poison between targeting King or Jaire Alexander.

According to Dairyland Express, King’s stats (from Pro Football Focus) paint a very efficient picture of what King was able to do last year, especially when looking at when he was targeted.

On 88 pass attempts, King allowed just 60.2 percent of those passes to be completed (about 53 passes), while picking off the third-most passes in the league (5), breaking up 11 passes and allowed opposing quarterbacks to only have an 86.6 passer rating, all of which help put him up towards the top of the ranks for all CBs last year.

Serving as a solid no. 2 corner that is a good fit next to Alexander, King’s best time to get paid is going to be the offseason between the ‘20 and ‘21 seasons, where there will almost certainly be some sort of financial ramifications that the league will implement to offset lower profits due to COVID.

Just by looking at the impending list of upcoming free agents that the Packers will need to resign, the top three (most likely) will be Clark, Bakhtiari and then Jones, which could leave King out in the cold, especially with the lack of fruitful cap space GB has next offseason.

The adjusted cap for ‘21 is currently at $198.2 million, and if that figure stays the same, then the Packers would only go into the offseason with around $16.4 million in space, meaning that Clark’s contract alone would most likely eat all of that up. When it comes to creating more space, converting roster bonuses into signing bonuses or other means are all on the table for GB and they have been used in the past, so the thought of having a clean reset for some of the team’s major positions for the ‘21 season is a scary thought, but not totally out of the expected outcome.

Just by looking at his ‘19 season, King is deserving of an extension, one that would keep him in green and gold for the next four-plus seasons – the money issue is what is going to be the biggest determinant in if he remains with the only team he has known in the NFL or if he takes his talents to another franchise. 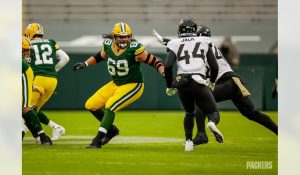 Packers' upcoming free agents, come on down: who will the Packers extend next?