There are two sides to every professional football player.

On one side is the fearless, relentless competitor who will stop at nothing to help his team win. Blood, sweat, and occasionally tears are part of the job. All of this is part of getting their team to the pinnacle of success, a Lombardi Trophy for the team, a Super Bowl ring on their finger, and the right to call themselves a champion for the rest of their lives.

On the other hand, there is the private life of the professional athlete. The part which involves family, charity, and giving back to the community which supports the player. It is the part which is sometimes overlooked, because of the focus for on the field performance of the player.

It is the off the field part that is what the player will ultimately be remembered for. The ability to give back after being given so much during their playing career.

Ryan Pickett is no exception to this.

Drafted with the 29th overall pick in the 2001 NFL Draft by the St. Louis Rams, Pickett has had more than his share of on the field success. An unmovable force along the defensive line, his professional career began with an appearance in Super Bowl XXXVI as a rookie with the Rams. After joining the Packers in 2006, “Big Grease” has become a key component to the Packers’ success in recent years.

An NFC Championship appearance in 2007. A Super Bowl title in 2010. A franchise best 15-1 regular season record in 2011. These are just a few of the successes Pickett has achieved as a member of the Packers.

It is his off the field contributions that are the true success of Pickett.

In 2008, Pickett and his wife, Jennifer,  partnered with Acts 1:8 Ministries to start the Tackle a Tower program. This resulted in donating resources with each tackle he recorded to help build water towers in Ugandan villages. Through last year, more than 50 water towers had been built, with the ultimate goal being more than 100 total water towers being constructed.

Pickett has also spoken to troops before their deployment overseas, participated in the All Pro Dad Program, and attended dinners supporting the Donald Driver Foundation.

His foundation, The Ryan Pickett Foundation, is currently doing some tremendous work to assist those who desperately need help

The foundation’s mission statement is simple yet powerful:

The Ryan Pickett Foundation’s mission is to act as God’s helping hand reaching out to various organizations or groups in desperate need that have been forgotten or left behind.

In 2013, that mission statement is taking on a very special goal-to assist children who are in foster care after being rescued from horrible conditions in their homes.

The Ryan Pickett Foundation has pledged that all contributions in 2013 will assist two groups dedicated to helping children in need: the American Foundation of Counseling Services in Green Bay, and Promises2Kids based out of San Diego.

Both organizations exist solely to help children, and the collaboration with Pickett, himself a  father of six, serves as a terrific way for a player to give back. It will truly be his lasting mark, much more than his success on the playing field.

Please see the scorecard below to get an idea of the number of celebrities who have already confirmed to attend: 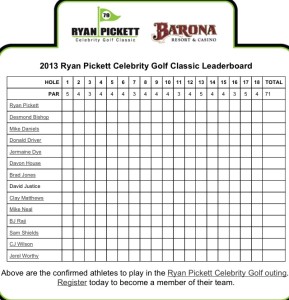 There are a number of ways y0u can help. Play in the tournament.  If you have a business to promote, buy a sponsorship package. If you live in the area and have free time, volunteer to help out at the tournament. Or, just go to the website and click “donate” to help out his foundation.

If ever there was a golf event to attend, this is the one. And it all helps children so desperately in need of assistance.

Ryan Pickett has already left his legacy on the field. His Super Bowl 45 ring is evidence of his professional success. It is his off the field contributions through his organization which will leave an even more important legacy, especially in the lives of the children it assists.

If you would like more information about the Ryan Pickett Foundation, please visit http://theryanpickettfoundation.com/

Cheesehead Radio will have the pleasure of speaking with Ryan tonight, 4/18/13. We hope you will tune in!